Claim: Turkey connives flow of DAESH across its southern border

John Hudson and Nancy A. Youssef voice claim in their article that Turkey has not done anything to stop DAESH’s crossing its border 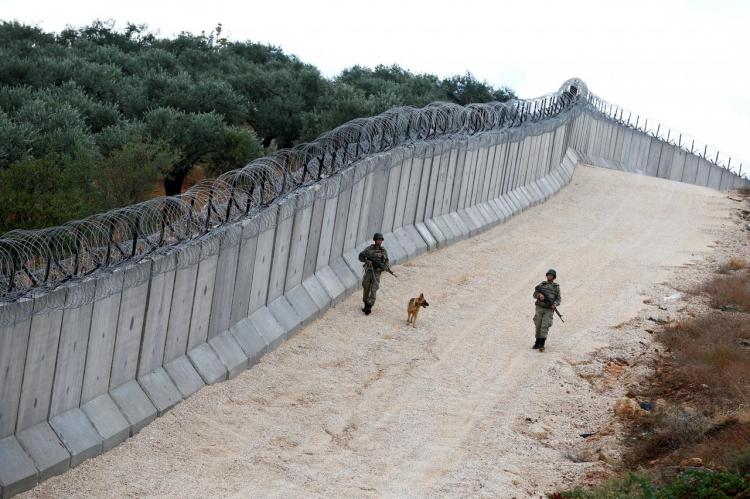 A K9 unit patrol along a wall on the border line between Turkey and Syria, near the southeastern village of Besarslan, in Hatay province, Turkey

On 20 July 2017, Buzzfeed published an article written by John Hudson and Nancy A. Youssef in which they voiced the claim that “tens of thousands of ISIS fighters used Turkey as a way station in their journey to Syria, amid allegations that the Turkish government was not doing all it could to stanch the flow.”

However, Turkey's fight against DAESH is factually evident.

Turkey has long suffered DAESH’s deadly terrorist attacks. 316 people were killed and 1200 people wounded in these attacks launched by DAESH on Turkish soil since the deadly attack in the Central Anatolian province of Nigde took place on 20 March 2014 that left 3 people dead. 72 Turkish soldiers were martyred during the Operation Euphrates Shield, which Turkey launched on 24 August 2016 to eliminate DAESH presence in northern Syria.

Turkey listed DAESH as a terrorist organization on 10 October 2013. Since then, it has shut down 12 associations and barred 53.781 people from 146 countries from entering the country for links to the DAESH, according to a new book – titled “Turkey’s Fight against DAESH” – published by the Ministry of Interior. The book also states that 4.957 people from 99 countries have been deported on the suspicion of being linked to Daesh. 9.350 foreign terrorist fighters have been detained and 1.337 of them have been arrested.

Turkey’s fight against and efforts to prevent 900 km long Turkish-Syrian border from DAESH consist of both military precautions and also some socio-cultural tools which can be listed as follows:

·         Presidency of Religious Affairs prepared a 40-page report titled “Basic Philosophy and Religous References of DAESH” to prevent sympathy for DAESH. Presidency indicated in the report that DAESH had no connection with Islam

·         Turkey has put a new border project, in which it has spent around 300 million Turkish Liras, into effect which includes building trenches, constructing concrete bases for fence wires, concrete walls, bastion barriers, and patrol roads. It finished the construction of a 700 km wall so far

·         Turkish fighter jets conducted their first air strikes in August of 2015 as part of the Global Coalition against DAESH it joined right after the release of 49 Turkish hostages abducted by DAESH, which, as Turkey’s President Recep Tayyip Erdogan stressed, was an obstacle to taking part in the coalition so as not to put the hostages’ lives in danger.

·         Turkey allowed the US access to the Incirlik airbase used by the coalition forces, which remains crucial according to the EU