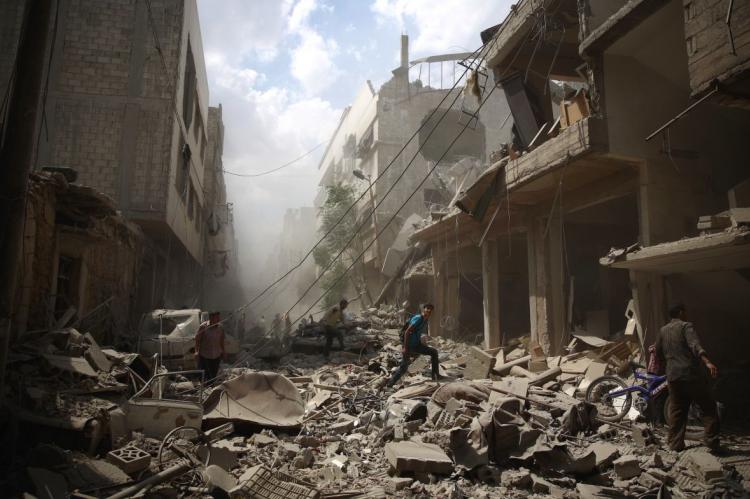 A ruined area controlled by rebels in Syria

On 14 September 2016, an article was published in The Huffington Post in which it was claimed that Kurdish militants are the most effective fighters against the president of Syria, Bashar al-Assad, whose regime controls now less than half of Syrian territory after it opened fire on unarmed protesters in 2011 and instigated a civil war which resulted in more than 250,000 deaths and forced more than 11 million Syrians from their homes.

According to the author, “Turkey is worried that the most effective anti-Assad fighters in Syria — the Kurds — are working hand in hand with Kurdish separatists in the Turkish southeast.”

A number of reports, however, dispute the claim that the most effective fighers against the Syrian regime are Kurdish militants. Some even suggest an alliance between the Kurds and the regime since the beginning of the civil war though Syrian Kurds have been discriminated by the Syrian government for years.

An article published in The Los Angeles Times wrote “The Kurds have played both sides of the Syrian conflict, forging tactical alliances with both the Syrian government of President Bashar Assad as well as the rebels fighting to end his rule.”

Syrian Kurdish writer and politican Salah Badruddin is reported to have said in an interview that “the Democratic Union Party (PYD) and the Syrian government were allies since the outbreak of the Syrian civil war in 2011.”

“In the complicated world of politics, even allies sometimes clash, and up to the present moment, I haven’t seen PYD and the Syrian regime clashing seriously, and thus what happened recently in Qamishlo can be seen as a matter of disagreement between friends,” Badruddin said.

Another article published in 2012, a relatively early stage of the Syrian civil war, claimed that “Politically divided and uncertain about their future, Syria's two million Kurds, 10 per cent of the population, have played a limited role in the uprising, analysts, activists and Kurdish groups say.”

Furthermore, Syrian rebel groups also have played a major role in the fight against the Syrian regime, according to a BBC report. A rebel group named Jaysh al-Islam, for instance, claimed that “it was behind the bombing of the National Security Bureau's headquarters in Damascus in July 2012, which killed several senior security officials including the defence minister and President Assad's brother-in-law.”