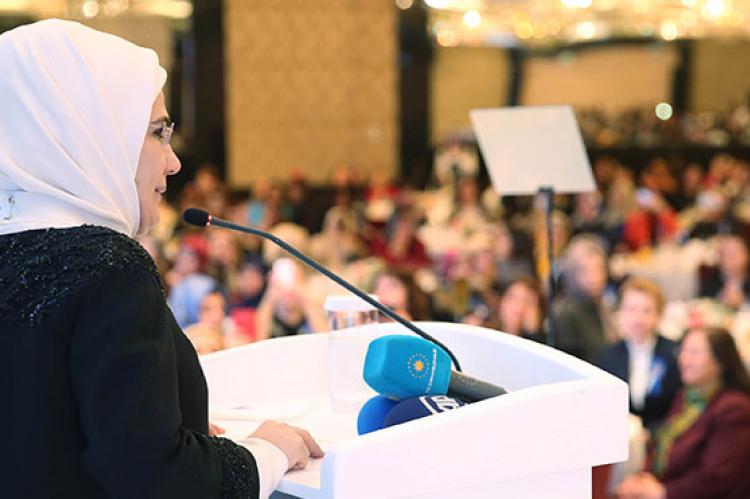 The AFP (Agence France-Presse), the third largest press agency in the world, wrote on 9 March 2016 that Turkey’s First Lady Emine Erdogan praised harems as a “school for women”. The story was also published by some major news outlets such as the Guardian1 newspaper and German daily Der Spiegel2.

A harem is by definition a sanctuary or a sacred precinct. The Imperial Harem of the Ottoman Empire (Harem-i Humayun) composed of the wives, servants, female relatives, and the sultan’s concubines. It also housed Sultan’s mother and daughters.

On 9 March 2016, Emine Erdogan in an official event on the Ottoman Sultans in Ankara said:

"The harem was a school for members of the Ottoman dynasty and an educational establishment for preparing women for life”3.

To counter Emine Erdogan’s statement, the AFP news agency cited a tweet by professor Ozlem Kumrular from Istanbul’s Bahcesehir University. However, the AFP not only misspelled the professor’s name as “Kurumlar”, they also made a crucial mistake while translating her tweet.

The translated tweet is as follows (the original in parentheses):

Upon seeing the Guardian’s translation, Kumrular on Thursday tweeted:

“The Guardian mistranslated my tweet! I was explaining about the cargo that was to be delivered to the harem in a ship that sank in 15835.

Moreover, through mistranslation, one particular historical instance mentioned in Kumrular’s tweet is presented as a general implementation during Sultan Murad III’s 21-year reign between 1574-1595.

In contrast to what the AFP attempted to present, education is described as one of the foremost priorities of the harem by many historians and in the narratives of female travellers.

Explaining that the word harem is a term of respect, redolent of religious purity and honor, and evocative of the requisite obeisance, Leslie Peirce in her book the Imperial Harem states that the harem “might best be described as a training institution.” Furthermore, she underlines the seriousness of the educational enterprise undertaken in the harem, stating that there was an ambitious program of study in the harem, and women were trained in skills that were deemed appropriate for them at the various levels of the harem’s hierarchy.

Similarly, historian Miri Shefer-Mossensohn in her book Science Among the Ottomans explains that a similar institute to the Enderun School (the school at the palace) where future bureaucrats were trained was also run in the harem where young women were trained. She writes that Europeans compared the lifestyle in the palace and harem schools to a monastic regimen: “In both, strict discipline was implemented, and the solemn atmosphere demanded, among other things, complete silence. The harem school, like the palace school, was a very detailed, hierarchical system with similar ranks and advancement tracks.”

Laura Wise in an article titled “The Harem: Slave Pen or Women’s Powerhouse?” describes the harem as a place where women were taught religion, mathematics, embroidery, singing, music and literature.