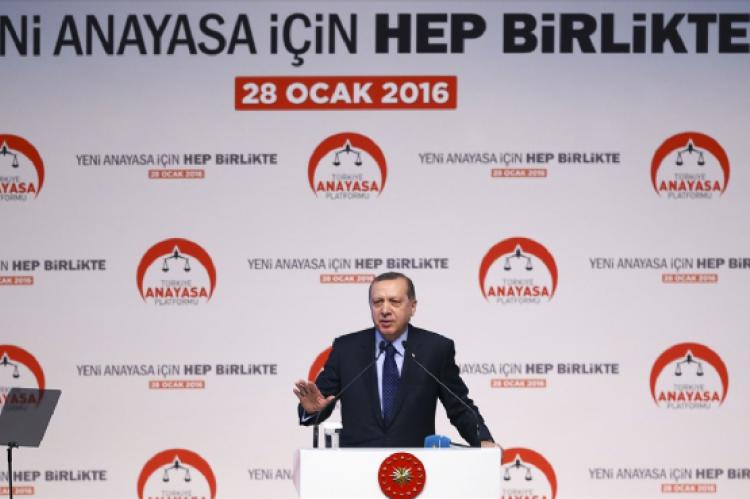 The Economist published a news article on 20 February 2016 in which it was claimed that Turkey’s President Recep Tayyip Erdogan is “single-mindedly pursuing a constitutional change that would extend the powers of his presidency”.1

The current constitution, however, gives the president far more rights than a presidential system would. For example, the president now has the right to send laws back to the parliament to be reconsidered and to appeal to the Constitutional Court (whose members are appointed by the president) for the annulment of unconstitutional laws. Moreover, if the president deems it necessary, he/she has power to preside over the Council of Ministers under his/her chairpersonship, to submit laws regarding amendments to the constitution to referendum, to proclaim a state of emergency and to issue decrees with the force of law. In addition, the existing constitution states that the president cannot be held responsible. In the parts regarding accountability, the constitution reads as follows:

"No appeal shall be made to any judicial authority, including the Constitutional Court, against the decisions and orders signed by the President of the Republic on his/her own initiative."

Therefore a constitutional change regarding the presidential system will not extend the powers of the president but will limit them through the introduction of the principle of accountability.

The fourth in the history of the Republic, the current constitution in Turkey was ratified on 7 November 1982, replacing the constitution of 1961. In 1980, a military coup was staged "to bring peace to a polarized society” according to the coup generals. On 29 June 1981, the military junta appointed 160 people as members of an advisory assembly to draft a new constitution. The constitution that was written included statist and non-democratic clauses. Most observers agree that "the primary objective of the [1982] Constitution was to protect the state from the actions of its citizens, rather than protecting the individual liberties from the encroachments of the state.2" In order to remove the traces of previous coups, Turkey today is working on a new constitution and is discussing the pros and cons of a governmental system change.