Claim: Turkey's President Rewrote the History of the 2016 Coup 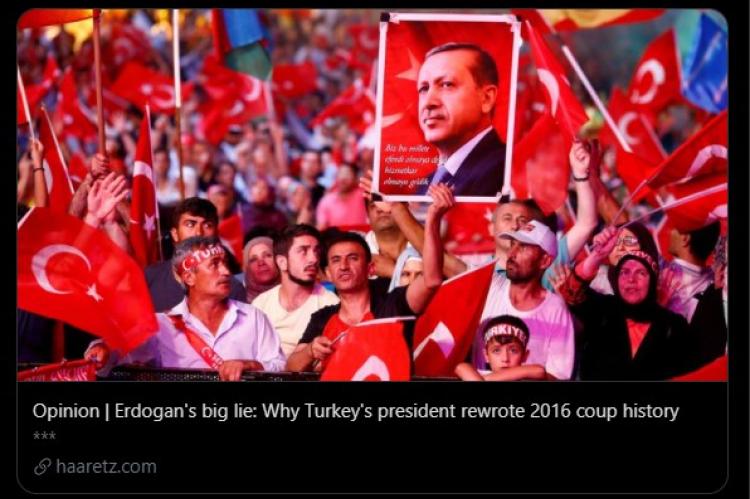 On 14 July 2021, Haaretz published an opinion article written by Simon A. Waldman. In the article, it was claimed that ‘Turkey’s president rewrote the history of the 2016 coup attempt’.

Moreover, the article claims that Erdogan justifies his relations with Russia, China and Iran because the allies abandoned Turkey in its hour of need during the coup attempt.

Fact-Checking Turkey will present evidence that proves that some countries and international media failed to respond to the coup attempt during the crisis.

On 15 July 2016, it was reported that Istanbul's Bosphorus Bridge, which links Europe and Asia, had been obstructed by military personnel using tanks.

First, it was rumoured that the bridge may have been closed because intelligence suggested a terror attack was underway. However, it was soon found that this was not the case; in fact, it was a coup attempt launched by a renegade clique in the army.

The coup plotters were allegedly part of FETO – also known as the ‘parallel structure’ or the ‘parallel state’. This is a clique led by US-based cleric Fethullah Gulen, which has infiltrated important offices in Turkey and is listed as a terrorist organisation in the state.

Tanks roamed the streets. The Turkish Radio and Television Corporation (TRT), the Turkish state channel, was occupied by coup plotters, and an anchor-woman was forced to read out an unlawful declaration live. For the first time in its history, Turkey’s Grand National Assembly was bombed by jets; Turkish President Recep Tayyip Erdogan escaped death by mere minutes. 208 people, 145 of which were civilians, were killed and 1,491 were wounded over four days.

1. The Economist described how the coup attempt in Turkey could be successful.

2. Reuters wrote a news story in which terror organisation leader Gulen claimed the coup was ‘staged’.

3. Andrew Finkel wrote in The Guardian that ‘Turkey was already undergoing a slow-motion coup – by Erdogan, not the army’.

4. Ralph Peters said on Fox News that ‘If the coup succeeds, Islamists lose and we win’.

5. Ben Shapiro tweeted that overthrowing Erdogan in Turkey ‘would be a boon to the world and the population’.

6. Michael Rubin wrote in New York Post that ‘the coup in Turkey could mean hope’.

7. Foreign Policy published an article by Michael Rubin titled ‘Erdogan has nobody to blame for the coup but himself’.

9. On 24 March 16, Newsweek published Michael Rubin’s article calling for the coup and tweeted it again during the coup attempt in Turkey.

10. Ralph Peters said on Fox News that ‘People staging the coup are on our side [the side of the US]. They are pro-democracy and pro-secular constitution’.

11. The day after the failed Turkey coup attempt, Egypt's pro-army newspapers falsely reported that the coup in Turkey had succeeded and that Turkish President Recep Tayyip Erdogan was overthrown.

12. Geopolitical Futures released an analysis, which stated, ‘It appears that the coup in #Turkey has been successful’.

13. Time columnist Ian Bremmer tweeted a cartoon that depicted Turkish President Recep Tayyip Erdogan in a tank grabbing a rat, saying ‘GOT IT!’

14. Amid the failed Turkey coup attempt, the Guardian published an article titled ‘How Erdogan inflamed tensions in Turkey’ then changed the title later on, but retained the tweet.

15. Nine days after the 15 July coup attempt was defeated, an article published in the Independent likened the Republic of Turkey to Nazi Germany. Later on, the Independent removed both the article and the tweet: ‘President Erdogan’s Turkey is modelled on the Third Reich’.

16. Time’s Europe cover referring to the failed coup attempt read ‘The country resists an attempted coup, but the worst could be yet to come’.

President Recep Tayyip Erdogan condemned Western countries for failing to show solidarity with Turkey over the failed coup, saying that those who worried about the fate of coup supporters instead of Turkish democracy could not be friends of Ankara.

On July 15, the world closely followed the unfolding situation in Turkey. Some countries and international organisations were quicker to condemn the attempt than others. However, it is clear that other countries did not respond to the coup attempt as quickly as democratic states should.

For instance, Michael Thomas Flynn – a retired United States Army lieutenant general and the 25th US National Security Advisor – praised the July 15 coup attempt: ‘There is a coup in Turkey right now; soldiers who want to protect Turkey's secular identity against the Islamist Erdogan administration are carrying out a coup’.

The article claims that, ‘considering that Ankara has consistently accused the West of abandoning Turkey in its hour of need, one would expect that Turkey’s newfound, non-Western allies were quicker to support Turkey during the night of the coup, however, this was definitely not so’. The author wrote the article before going on to evaluate examples of evidence.

It is obvious that some countries and international organisations were quicker to condemn the attempt than others, and Western allies seemed likely to be the slower ones.

In light of the aforementioned examples, it is critical to ask why some countries and international media responded to the coup attempt in this manner after heroic Turkish people did not let it occur. If the coup attempt had been successful, would Western countries have supported the putschists? This consideration is the reason why Erdogan is disappointed by traditional allies who abandoned Turkey in its hour of need.