Skip to main content
Prev article
Claim: US and UK 'strongly criticize' Afrin Operation
Next article
Claim: Turkey conducted airstrikes where "there were no YPG fighters" 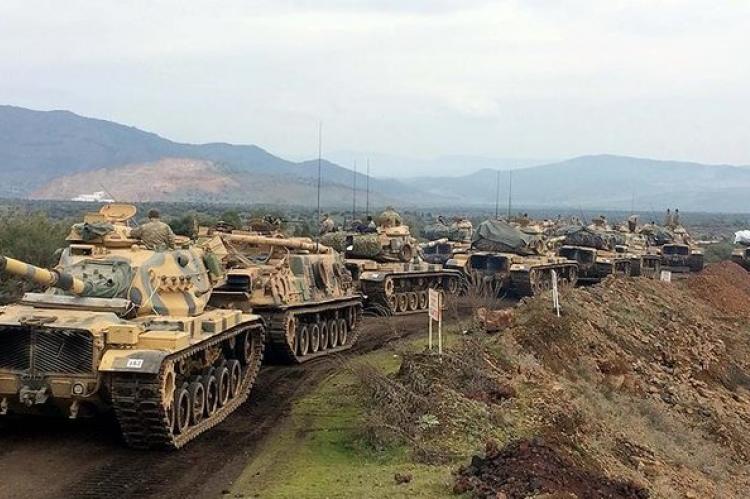 Turkey launched Operation Olive Branch on 20 January 2018 in Syria’s northwestern Afrin region to clear terrorist organizations including the People’s Protection Units (YPG), which is the armed wing of the PYD. YPG currently holds an uninterrupted 400-km (250-mile) stretch of the Syrian-Turkish border.
Covering Turkey’s recent operation in Afrin, international media outlets’ reports include several misrepresentations. As Fact-Checking Turkey, we have gathered the top five false claims together.
CLAIM 1: Turkey is invading Syria
Turkey highlights that it has no intention to sustain a permanent presence in Syria. Both the Turkish Foreign Ministry and General Staff emphasized Turkey’s commitment to the territorial integrity of Syria in their statements. Foreign Minister Mevlut Cavusoglu stated that the objective of the operation is to “ensure the border security, eradicate terrorists in Afrin and save the Syrians from the oppression and cruelty of those terrorists.”
Turkey has the right to eliminate the security threats it has been facing through cross-border military action as this is a recognized rule of international law which is conferred in the Article 51 of the UN Charter and in the relevant Security Council resolutions.1 British Foreign Secretary Boris Johnson and US Secretary of Defense Jim Mattis have also acknowledged Turkey’s right to keep its borders secure and self-defense.
CLAIM 2: YPG is not a terrorist organization
PYD/YPG is the Syrian branch of the Kurdistan Workers’ Party (PKK) which is designated as a terrorist organization by the US, the EU and Turkey. The authorities and the official sources in the US admitted the relationship between the PKK and the YPG on many occasions. The former-US defense secretary Ashton Carter confirmed the substantial ties between the YPG and the PKK during a testimony before the Senate panel on 28 April 2016.
Also the United States National Counterterrorism Center (NCTC), which is the primary organization in the US government for integrating and analyzing all intelligence pertaining to terrorism possessed or acquired by the US government, described the PYD/YPG as the Syrian affiliate of the terrorist organization PKK-KONRA-GEL (KGK). Jamie Lane, a US soldier that joined the YPG, said there was no difference between the PKK and the YPG in an interview with the Wall Street Journal. Lane stated that the PKK militants only change their uniforms and turn into YPG fighters.
CLAIM 3: YPG does not pose a direct security threat against Turkey
The YPG is not only an affiliate of the PKK terror group, but it is also actively contributing to the PKK’s armed campaign against Turkey. On 8 December 2016, the PKK carried out a bomb attack outside a stadium in Istanbul. The attack left 47 people dead and 166 people injured. As for the suicide bomber, he turned out to be a YPG member who came from Syria.
It was also revealed that the PKK has used the arms delivered to the YPG against Turkey. On 2 November 2017, the PKK killed 8 Turkish soldiers in the Turkish border town Semdinli. It was revealed that PKK militants used AT-4 anti-tank missiles given to the YPG by the US for the anti-DAESH campaign.
The YPG’s tunnels inside Turkey were discovered by the Turkish authorities in August 2017 between the Syrian border city Qamishli, which is under YPG control, and the Turkish border town Nusaybin. It is believed that the arms given to the YPG to fight DAESH were moved via these tunnels to carry out attacks in Turkey. To see more on the YPG-PKK relationship, please click here.
CLAIM 4: Turkey attacks a peaceful region governed by a democratic body
Although some media outlets try to present the YPG as a democratic organization and YPG-held areas as “peaceful regions”, YPG has a long track of human rights violations varying from ethnic cleansing to using child soldiers and forced disappearance of its opponents.
An Amnesty International Report (2015) states “by deliberately demolishing civilian homes, in some cases razing and burning entire villages, displacing their inhabitants with no justifiable military grounds, (YPG) is abusing its authority and brazenly flouting international humanitarian law, in attacks that amount to war crimes.” The report mentions that in some cases, YPG militants threatened civilians with calling US airstrikes if they would not leave their villages. A Human Rights Watch Report (2015) states that YPG regularly recruits child soldiers despite its promises to “follow up” such cases. Another Human Rights Watch Report accuses PYD/YPG with arbitrary arrests, extrajudicial killings and again, using child soldiers.
The YPG continues to carry out terror attacks which pose a serious threat to anyone living in and around the region. On January 21, it targeted two hospitals in Azaz in northern Syria that left at least one killed and 15 injured. Since the beginning of the Syrian Civil War, the YPG carried out similar attacks in which 407 civilians killed, including 51 children.
CLAIM 5: Turkey attacks Kurds
This rhetoric falsely equates the Kurdish society to the identity of the PKK/PYD terror organization. Turkey has underlined that it does not target the Kurds, but a terror group which oppressing the Kurdish, Arab and Turkmen people under their rule. Turkish President Erdogan stated "Turkey is fighting against the terrorist organization in Afrin, not the Kurds".
Presidential spokesman Ibrahim Kalin also stressed that Turkey is not acting against the Kurds of Afrin or Syria. “This is an operation against  a terrorist network that claims to represent the Kurds, but this is far from the truth as there are thousands of Kurds who do not subscribe to the PKK/PYD’s Marxist- Leninist ideology,” he pointed out.
Tags:
Turkey
Afrin Operation