Skip to main content
Prev article
Claim: No possibility of appeal against decrees in Turkey
Next article
Does proposed presidential system in Turkey have no checks and balances?

Claim: HDP leaders in jail because of electoral success 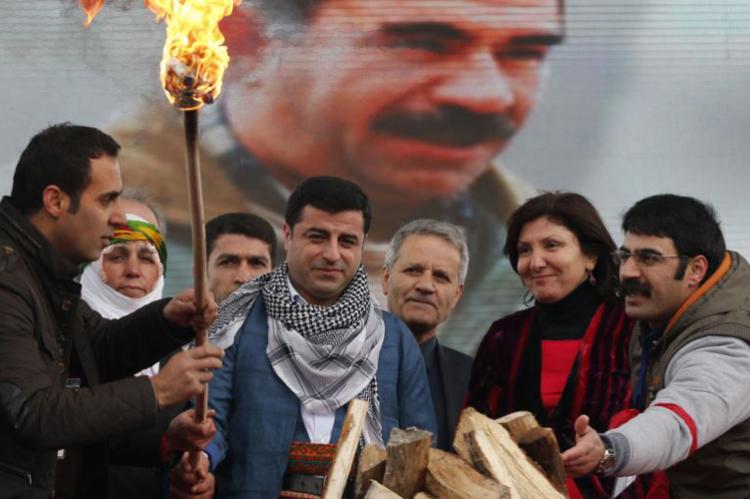 On 24 March 2017, The New Yorker published an article penned by Dexter Filkins who voiced an oft-repeated claim that Turkish President Recep Tayyip Erdogan “cracked down on the Kurds” because of his discontent with the results of the June 7 elections in 2015.

The author wrote that “in 2015, the H.D.P. captured an astounding eighty seats in the Turkish parliament. The Party had even begun to attract non-Kurdish voters. Soon, however, Turkey’s President, Recep Tayyip Erdoğan, began cracking down on the Kurds. Thousands of members of the H.D.P. were detained.”

In addition to the author’s failure to mention the Kurdistan Workers’ Party (PKK), an armed group on Turkey’s terror list which a number of People’s Democratic Party (HDP) members publicly lent support to, the author also failed to mention three integral aspects in his narrative.

First: the so-called “crackdown” took place after a two-and-a-half year ceasefire between the Turkish state and the PKK that started in 2013 was unilaterally canceled by the PKK in the summer of 2015. In strict contrast to the author’s story whereby the Turkish president decided to punish a political party for no reason other than its electoral success, what was actually at stake was the HDP’s ties to the PKK.

Second: the HDP was never shied away from giving support to the PKK and that was the reason why its leaders and members were arrested. Fact-Checking Turkey previously covered the HDP’s public support for the PKK extensively. Please click here and here for examples.

Third: the general elections were renewed on 1 November 2015 because the political parties failed to form a coalition government after the June 7 elections. As a result, the HDP lost nearly a million votes and its vote share fell from 13.2 to 10.7 percent in the renewed elections. Analysts related this rapid decrease to the HDP’s support for the PKK’s proclamation of “self-rule.”

The author’s second claim was that “Erdoğan, who came to power following nationwide elections in 2002, has spent the past decade doing his best to strangle Turkey’s democratic order.” Crucial democratic developments that took place since 2002, however, contradict this claim. Some examples are as follows:

More than 400 properties were returned to the Armenian community in Turkey; the headscarf ban in state institutions and universities was removed; and restrictions on speaking or writing in the Kurdish language was lifted. For more information on Turkey’s recent democratic developments, please click here.

The author’s third claim concerned the upcoming referendum on a constitutional change bill that will be held on April 16: “The referendum proposes to radically alter that system, eliminating the position of Prime Minister, drastically curtailing the powers of parliament, scaling back the independence of the judiciary, and vesting sweeping powers in the Presidency.”

As for the false claims of “curtailing the powers of parliament, scaling back the independence of the judiciary, and vesting sweeping powers in the Presidency,” read our in-depth fact-check of frequently voiced claims about the constitutional reform.